Is Amber Heard escaping to her $1M desert hideaway? Trolls remind actress of unpaid charity pledge
Posted by  Boss on May 30

Amber Heard is reportedly preparing to take a break in the desert she adores now that her horrific six-week defamation trial against ex-husband Johnny Depp has come to a conclusion.

The actress, 36, is reportedly preparing to relocate to Joshua Tree, California, with her one-year-old daughter Oonagh, to a $1 million three-bedroom family house, according to sources.

“Amber likes spending time in the desert,” a source told Mirror. It’s the one location where she can get away from it all. She feels very connected to the artistic community there, and she feels like she’s on vacation.” “Joshua Tree is full of cool hipsters and it’s just her scene,” the person stated.

“In recent months, it’s given her time to ponder and escape the stresses of the case,” he says, adding, “It’s given her time to get away from it all and it’s a sanctuary.” On the penultimate day of the trial, Amber Heard said, “Perhaps it’s easy to forget, but I am a human being.” We’re guessing the retreat will undoubtedly help her cool off throughout the trial. 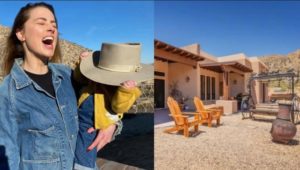 Amber Heard in her mansion

Is Amber Heard escaping to her $1M desert hideaway?

Depp, 58, has filed a $50 million lawsuit against his ex-wife for an op-ed she wrote for the Washington Post in 2018. Heard claimed to be a survivor of domestic violence in the piece, which Depp’s lawyers believe has harmed his Hollywood career chances despite the fact that he was not addressed in the story. In reaction, Heard filed a countersuit for $100 million, alleging that Depp had assaulted her throughout their turbulent marriage. On May 27, 2022, the highly publicized trial came to an end.

Meanwhile, Amber Heard’s planned desert escape drew a lot of attention on Twitter. While some people appeared to be in favor of her, the majority of users appeared to be against her on the platform. “#JusticeForJohnnyDepp,” one person wrote. “You know who else adored the desert cult leaders Manson to begin with, maybe everyone should see her for what she is only her sister, the only one left as the others realized what she is…”

“Amber Heard droned on about how very sensitive and delicate her skin was,” another added. Then he goes out and buys a mansion in the desert.” “What you really should be reporting on, @SkyNews, is the fact that @realamberheard can buy a £1 million ($) HOME in the desert yet stiffed the children’s hospital out of money!” one tweet read. He’s been through a lot, so let him let off steam by playing guitar in support of a friend.”

“It’s not a hideaway if she gives the press images of it,” another wrote. “Good lord,” someone said, “yet she hasn’t donated the divorce settlement she promised to charity.” What else will she lie about if she can lie publicly about how she donated all the money to a children’s hospital? She’s a conniving, dishonest liar who lies. She’s such a turd.”

“After the trial, @realamberheard is apperantly relocating to a 1 million dollar desert mansion with some hipsters…. she’s presuming she’ll win?” one person fumed. What will you do if you don’t find Amber? How will you pay the $50 if you’re only worth $8 million?”

What Is Wrong With Yasmin Vossoughian Face? Fans Notice Something Might Be Wrong With MSNBC’s Anchor
Erik ten Hag ‘surprised’ by Manchester United’s transfer window as Christian Eriksen keeps stalling