MAYA HAWKE’S ASCENT: FROM THE BBC TO HOLLYWOOD AND STRANGER THINGS
Posted by  Boss on Jul 10

MAYA HAWKE’S ASCENT: FROM THE BBC TO HOLLYWOOD AND STRANGER THINGS 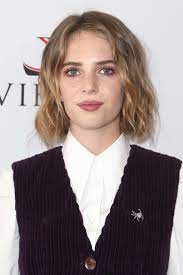 Maya Hawke, happy birthday! We’re going to take a quick look back at Maya’s career to commemorate her 24th birthday and show how she has been meteorically soaring to mega-stardom.

Maya, the first child of Uma Thurman and Ethan Hawke, was born into the entertainment world. She has discovered popularity on her own, though, and is no longer dependent on her famous parents. She has worked hard to have a highly respectable acting career.

Maya Hawke made her acting debut in the BBC rendition of Little Women, which helped to boost her career to some extent. Maya achieved success after appearing in a few Hollywood productions when she was cast as Robin in Season 3 of Stranger Things. Her upcoming stellar performances are something we eagerly anticipate.

THE START WAS WITH LITTLE WOMEN

Ethan Hawke and Uma Thurman, Maya’s parents, didn’t genuinely support her decision to become an actor due to their worries about “the public life part of acting and the problems of that.” They forbade Maya from “doing any bit-parts in their movies” in an effort to dissuade her. Fortunately, as Maya grew older, Ethan and Uma quickly came to their senses.

Maya was a model and worked on Calvin Klein and AllSaints campaigns before she became an actress. She landed her first role in the BBC production of Little Women in 2017, as Jo March. Maya credits shooting Little Women as a “life-changing good experience” since it gave her valuable lessons and allowed her to make friends.

THE GAME-CHANGER WAS STRANGER THINGS

It would be impossible to discuss our birthday girl without bringing up Stranger Things. For season 3 of Stranger Things in 2019, Maya played Robin Buckley and joined the cast.

By making Robin one of the most likeable characters in Stranger Things, the actress, who was 22 at the time, greatly impressed her fans and skyrocketed in popularity.

For her outstanding acting, Maya also received a Saturn Award for Best Supporting Actress in a Streaming Presentation.

JOURNEY TO HOLLYWOOD: TO BE CONTINUED

Maya is starting to amass movie roles as well! In Quentin Tarantino’s Once Upon a Time in Hollywood, she portrayed Linda Kasabian. She also portrayed Frankie in Mainstream from 2020 to 2021 and Heather Watkins in the Fear Street horror movie series on Netflix.

Maya was given a role in Bradley Cooper’s biography of Leonard Bernstein, Maestro, to be released in 2022. Maya Thurman appeared in The Kill Room in May alongside her mother, Uma Thurman.

And it’s obvious that this is just the start!