As : Modern Warfare 2’s release date gets closer, one question still remains… is it worth the hype?

Call Of Duty: Modern Warfare 2’s multiplayer will go live in a few hours, bringing with it a variety of , such as new maps, game modes, and vehicles.

This year, decided to switch things around and release the game’s a week earlier, so that it doesn’t get ignored by those desperate to play the multiplayer. Not everyone’s happy with it though, as it features some gruesome missions, with popular political streamer HasanAbi joking the game is

Not much of Modern Warfare 2’s gameplay has been shown yet, leaving many fans wondering whether the reboot will be much different from previous versions – especially as its battle royale counterpart, Warzone 2.0, is also set to launch a month later.

When does Modern Warfare 2 multiplayer come out?

As Activision pulled a switcheroo with Modern Warfare 2’s release dates this year, you’re not to blame if you feel unsure about when each mode is out.

The game’s multiplayer, which is what everyone’s been waiting for, will officially launch on Friday, October 28, though you might need to wait a bit longer if you plan to play on PC.

PlayStation and Xbox have already had regional rollouts for the game’s campaign mode, and this will also be the case for the multiplayer.

According to Activision, regional rollouts should commence between 12pm to 5am from October 27-28 for consoles. If you live in the UK, you should expect the game to unlock… later rather than sooner.

As for PC players, the multiplayer’s release time is set in stone for 5am BST on October 28, for both Battle.net and Steam.

As always, you should take this information with a grain of salt, as other popular games, such as Overwatch 2, have suffered recently.

How much does Modern Warfare 2 cost?

Like previous versions of the game, Modern Warfare 2’s standard edition costs £69.99 for both last and next gen PlayStation and Xbox consoles. The game’s physical copy for consoles costs £64.99.

If you’re a PC player, you’ll be able to save £10, as the standard edition is priced at £59.99, even though it comes with the exact same content.

There won’t be a Nintendo Switch or Google Stadia version of Modern Warfare 2, especially since the latter is in the process of for good.

Is there a special edition of Modern Warfare 2?

There isn’t a physical special edition for Modern Warfare 2 but there is a Vault Edition available online for all platforms.

The Vault Edition is priced at £99.99 (£30 more than the standard edition) for last and next gen Xbox and PlayStation consoles.

Here are all the extras the Modern Warfare 2 Vault Edition offers:

If you’ve already bought the standard edition, but wish you’d gone for the Vault, you can upgrade for an extra £25 through Steam.

Modern Warfare 2 has promised to bring several new improvements and changes to the series’ gameplay, ranging from advanced AI systems in the campaign and co-op modes to enhanced water physics and swimming mechanics.

An overhauled vehicle system has also been confirmed, allowing you not only to climb onto their roofs but also lean out of vehicle windows to fire at enemies – something that many players have already been doing during the game’s campaign mode.

The levelling and Gunsmith systems have also been revamped, offering you more customisation options so you can fine tune specific attachments to your liking. Though some fans weren’t too happy with the and even demanded older customisation systems to make a comeback.

In a bid to shake up the perks system, Modern Warfare 2 will introduce Perk Packages, which are equipped as part of a multiplayer loadout. Each package consists of four perks: two base perks plus one bonus perk and one ultimate perk.

You’ll start each match with two base perks, unlocking the bonus and ultimate ones over time, with eliminations and assists – plus objective and tactical plays that help to unlock them more quickly.

To further gain a strategic advantage against enemies, you’ll also be able to use field upgrades that charge over time throughout the match. At Rank 45, you’ll get the option to equip two field upgrades at the cost of a slow recharge rate on each.

The field upgrade items are as follows:

All the Modern Warfare 2 multiplayer modes

The game’s multiplayer will offer two distinct mode categories at launch, based on the type of map they are played on: core map modes and battle map modes.

However, this time you’ll be able to play two completely new core map modes: Knock Out and Prisoner Rescue. Knock Out will see two teams attempt to capture a bag full of cash from the middle of the map, while unable to respawn one another.

On the other hand, Prisoner Rescue will see an attacking team attempt to extract a hostage, while a defending team prevents them by fortifying defences around them.

Here are all the core and battle map modes available at launch, as well as other modes set to hit the game later on: 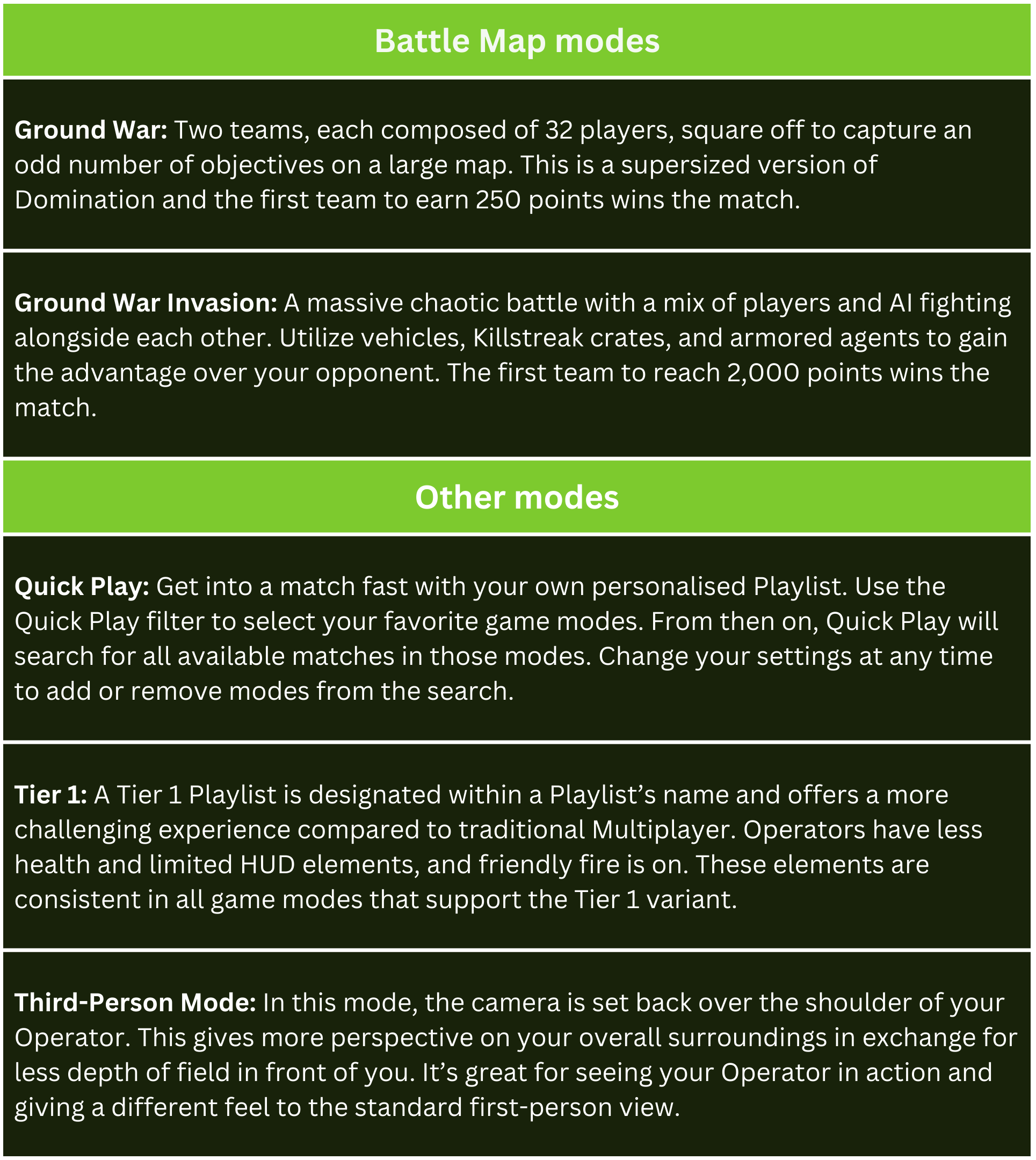 Although they’re not entirely new to the series, third person modes were also recently confirmed, along with a that features an additional three-player activity called Raids, set to release post-launch.

With all these new modes coming to Modern Warfare 2’s multiplayer, many hoped that a Zombies mode will also be included.

Some dataminers managed to find some though, which may indicate they’re coming later as DLC.

While you’re waiting for Modern Warfare 2’s launch to start, why not give its campaign mode a try and see if you can find secret weapons that are locked away in safes in the El Sin Nombre and Alone missions?

You don’t need to stress if you can’t guess because we figured it out for you.

Follow Metro Gaming on  and email us at [email protected]

To submit Inbox letters and Reader’s Features more easily, without the need to send an email, just use our .