Sebastian, Stephanie’s spouse, is also a Canadian actor in the same vein as Stephanie. The couple tied the knot earlier on in this year.

Stephanie congratulated her husband on his 38th birthday by uploading a series of images of Sebastian along with a comment that was packed with love on Instagram.

The romance film “Love On Your Doorstep,” which will be released in 2022, is the first time that the actor pair will collaborate on a project together. 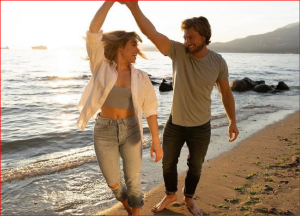 Sebastian Stewart was born on October 27th, 1984 in the city of North Vancouver, which is located in the province of British Columbia.

Performers Management Inc., a talent agency that represents actors working in cinema, television, and advertising, is the actor’s representative in the United States.

Alongside Rachael Leigh Cook and Greyston Holt, Sebastian, who is best known for his role as Aiden, the delivery boy on Smallville, appears in the upcoming Hallmark Channel movie “Cross Country Christmas.”

In the same year, he also appeared as a romantic guy in the television movie “Wedding Every Weekend,” which made its debut on the Hallmark Channel as a part of their Summernights programming block.

In addition, the actor will be working on two significant projects in the year 2022. A short while ago, the official trailer for his next romantic comedy, Love Served Here, which stars Sebastian and the actress Eva Tavares in the leading roles, was published on YouTube.

In the film “Love on Your Doorstep” produced by Reel One Entertainment, the actor also had the opportunity to collaborate with his wife for the first time. The two people were quite enthusiastic about the prospect of working together.

The screenplay for this film was written by Ansley Gordon, and it tells the story of a TV host show that profiles a local florist who ran a long-running floral competition in the hopes of landing her own show and providing same-day delivery florist service.

In the romantic film that Ken Friss is directing, Sebastian will play the role of Nate, and Stephanie, Sebastian’s wife, will portray the character of Maisie.

Stephanie Bennett And Sebastian Stewart Relationship Over the Years

The relationship between Stephanie, Bennett, and her husband, Sebastian Stewart, has been progressing to greater and greater heights throughout the years.

There is no room for conjecture on the precise beginning of the couple’s relationship. However, in October of 2021, the couple made their relationship public on Instagram by posting images of each other to their accounts.

The picture of the couple from Halloween dressed up in the opposite costumes was the first one that Stephanie uploaded online. While Sebastian is dressed as a Playboy bunny, Stephanie is channelling her inner Hugh Hefner.

Since then, the couple has been often posting images of themselves online, often accompanied by words that are endearing and occasionally humorous. The two people have a great deal of affection for one another and like spending time together when they are able to travel.

They celebrated Sebastian’s 37th birthday by going to Disneyland in Anaheim, California. Sebastian has expressed that it was the happiest one he spent with the person who brings him the most joy in his life.

The couple seems unable to get enough of each other, as evidenced by the fact that they spend their weekends going to markets and their vacations in Mexico. The couple enjoys a little bit of excitement every once in a while, such as going skiing on Mount Seymour.

After becoming engaged in April of the same year, they didn’t actually start married life together until August of 2022. On her Instagram account, Stephanie has been posting photos of her and Sebastian together with the statement, “Marrying you is the best decision I’ve ever made @sebastianjstewart.”
The fact that the couple is working on the same project means that they are constantly in close proximity to one another. When Stephanie became ill with Covid and felt that she had let down everyone on set, Sebastian, who had always been the model of a supportive husband, arrived to comfort and console his wife. 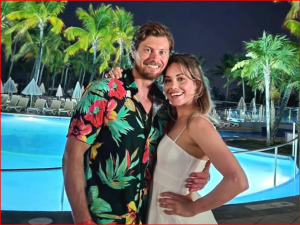 Sebastian Stewart is an actor best known from Smallville.

Do They Have Any Children?

Even though Stephanie and her husband Sebastian do not have any biological children, they consider their cuddly cat Zoe to be just as important as a child.

Stephanie and Sebastian Bennett, along with their fur baby Zoe, make up a family of three that is overflowing with love and joy.

Zoe Bennett is a mutt that is a mix of a Yorkie and a Dachshund. She was found on the streets of Tijuana. Zoe’s humans, Stephanie and Sebastian, dote on her and spoil her rotten.

Her Instagram account, which is called @zoe the dorkie, is full of adorable images that she has taken of Zoe.

Stephanie and Sebastian are the best possible parents for their canine baby, and they shower their furry child with an infinite amount of affection.

The pair has recently tied the knot, and both of them are immersed in their separate fields of work at the moment, so it is possible that they will not start a family for quite some time.

After they have been married for a good number of years, the couple may begin to think about having more children. However, it seems that for the time being, they are content with Zoe serving as their baby.

Actress Stephanie Bennett, who appears in Yellowstone, may be found on Instagram under the handle @stephaniedbennett. She has 45 thousand followers on Instagram and follows 1,217 other profiles there.

On her Instagram account, which boasts a total of 462 posts, Stephanie is a very active user. A picture of Stephanie with her dog Zoe was just just uploaded to one of her posts.

The majority of the photographs she posts on Instagram are of her on set with her husband Sebastien and their dog Zoe.

On Instagram, you can find Sebastien posting regularly under the handle @sebastianjstewart.

He just recently published an animated poster for his upcoming film Love Served Here. His wife has a much larger following on Instagram than he has on the platform. He has a relatively low number of followers (1,522) and has only made 91 posts in total.

To a fault, Sebastian has a soft spot in his heart for critters. There are photographs of him posing with his dog, Zoe, as well as other animals, including a tabby cat and a squirrel.

Kate Garraway heartbreakingly reveals husband Derek Draper’s Covid battle has ‘affected their relationship’ and left her with a ‘loss’
AEW Double or Nothing: MJF stretchered out after heavy Wardlow loss one day after missing Fan Fest signing
Love Island’s Sharon Gaffka details breast cancer scare while her mum was also battling the disease