Carl Dawson, an aspiring rapper and TikTok celebrity, attended Travis Barker’s wedding and was also invited to a family supper. Here’s all we know about their relationship so far.

Carl Dawson is a well-known TikTok celebrity in the United States, with over 5.5 million followers on his own TikTok account. Dawson not only has a large following on TikTok, but also on Instagram and YouTube.

The young man began his profession by uploading videos to YouTube, with his first being a 1v1 Fortnite combat. He is also a rapper and producer who rose to prominence following the release of his debut track, Kicking Through Your Door, in 2019.

Dawson has collaborated with a variety of artists as a rapper, and he has a close relationship with Travis Barker, the drummer for the rock band Blink-182. Barker recently married Kourtney Kardashian, and one of the guests at the wedding was TikTok star Dawson. 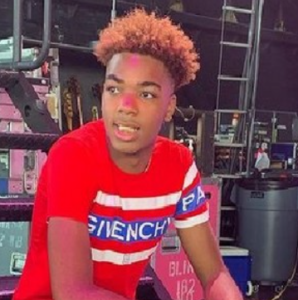 Carl Dawson, a TikTok celebrity, was also invited to Travis Barker’s wedding ceremony with his girlfriend-turned-wife, Kourtney Kardashian. The wedding ceremony took place on May 22, 2022, in Portofino, Italy.

Carl Dawson was one of Travis Barker’s wedding guests

Their incredible ceremony took place at the Castello Brown in Portofino, Italy. The elaborate wedding was attended by their relatives and close friends. Apart from that, a number of notable personalities attended, including Carl Dawson.

Dawson also posted on Instagram the wedding card that Barker had given him. Following the wedding ceremony, Dawson highlighted some moments that we can assume he thoroughly loved.

Is Carl Dawson an adopted child?

Carl Dawson turned 20 years old on May 31, 2001, when he was born to his parents. Many of his followers are concerned about his familial background because his father and mother’s names are not publicly disclosed.

He has not, however, spoken publicly about his parents. As a result, we may conclude that he is extremely private when it comes to his personal life. Meanwhile, fans have hypothesized that he is his parents’ adoptive son, although this is not the case. Dawson has also said nothing in response to this assertion.

Carl Dawson has amassed a substantial fortune as a well-known TikToker. His net worth is estimated to be between $500,000 and $1 million, according to various reports. He is also a rapper and has collaborated with some artists, which must have increased his earnings.

Dawson also generates money from his YouTube channel, which has over 489k subscribers. So, it’s safe to assume that he leads a luxury lifestyle, which Dawson flaunts on his Instagram account, which we can follow as @kingcarlx.