Yul Edochie, a well-known Nollywood actor, startled his fans lately when he revealed his second wife, Judy Austin, and their child.

He founded the “Yul Edochie Academy,” a training school for budding actors and actresses, as well.

The actor’s recent issue has sparked a heated debate regarding polygamy’s place in Christianity and marriage in general. Some praised him for acknowledging his polygamy, while others condemned him for betraying his first wife, May, with whom he had four children. 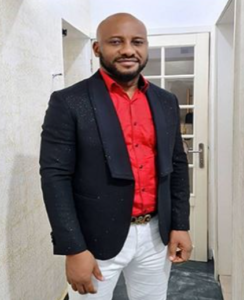 Yul Edochie Second Wife Photos: Did He Get Re Married In 2022?

Last Monday, Nollywood celebrity Yul Edochie remarried Judy Moghalu, who is also a Nollywood actress. Yul made headlines when he shared images of his new son and second wife on his official Facebook page.

Edochie, who is already married to May Edochie and has four gorgeous children, will be 50 years old in 2021.

With his employee turned baby mother, Judith Austin, he had a happy baby.

Many have accused Yul Edochie of betraying his first wife, who he claims supported him when he was a young man with nothing.

Yul and Judy have been together for a long time, and he directs all of Judy’s films. Judy Austin became pregnant as a result of their romance, which occurred during one of their shootings.

Yul Edochie was born Yul Chibuike Daniel Edochie on January 7, 1982, in Anambra State, Nigeria. He is currently 39 years old. The actor is the sixth and final child of a family of six children. His father, Pete Edochie, was a prominent performer, while his mother, Josephine, was a broadcaster.

He attended Marist Brothers’ Junioriate in Uturu and three different secondary schools in Enugu until 1988, when he graduated at the age of 16. The actor earned a bachelor’s degree in Theatre Arts from the University of Port Harcourt (UNIPORT).

Edochie moved to Lagos from Enugu when he was 23 years old and began his acting career. His urge to act grew stronger, and he made his acting debut in “The Exquires,” with the late Justus Esiri and Enebeli Elebuwa. He rose to notoriety in 2007 after appearing in the film “Wind of Glory” alongside Genevieve and Demond Elliot.

He has made a huge breakthrough in the film industry since his spectacular performance.

Yul Edochie’s new bride hails from the Nigerian state of Anambra, in the southeast. “Native Girl,” “Fear the Street Girl I Love,” “Where I Belong,” “Trouble Comes to Town,” and “Secret of the Riches” are some of her most well-known Nollywood roles.