Nicollette Dellanno is famous on the internet because of the POV, lip-sync, and dance videos she posts to her TikTok account.

Last month, she was seen with American football quarterback Zach Wilson. Fans wonder if they are dating or not because they are often seen holding hands. 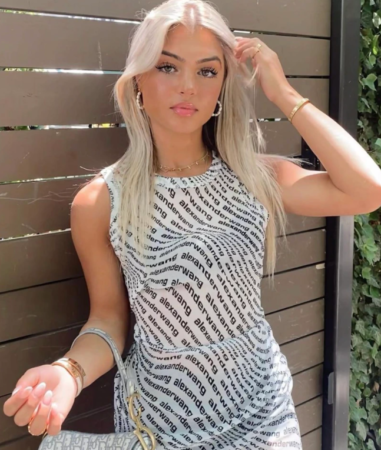 She is an American TikTok star who was born in the United States. Most of what she posts on TikTok are lipsync and POV videos, which have helped her gain 253,000 followers.

Wilson and Dellanno were sitting next to each other as they tried to do a Mexican wave. TV cameras even caught the two of them touching hands. Wilson sent a photo to some of his loved ones online during the last few days of his trip.

She has more than 39k followers on Instagram right now, and that number is growing. She is well-known on Instagram for the bikini photos and glamour shots of her.

Zach and his ex-girlfriend Abbey Gile just broke up because Zach was having an affair with another woman. After the breakup, Abbey started dating Zach’s BYU teammate and friend, WR Dax Milne. Fans started to tease Abbey by calling her a “homie hopper,” so she told a secret about Zach that shocked a lot of people.

It came out that Zach had an affair with his mom’s best friend, which could have caused him and Abbey to break up. This new information has given fans something new to talk about, and Zach hasn’t said anything about it yet.

She was born in the USA on December 15, 2001. Her fans love her because she is very charming and beautiful. On her TikTok account, she posts videos of herself lip-syncing to well-known songs. Her good looks and dance moves are what keep her fans watching her videos.

At the Yankees game, Nicollette and Zach were holding hands with other Jets players who had done team-building activities like going to bars, swimming, and going to a baseball game together.

In January, when they both cleaned up their Instagram accounts and moved on with their lives, he broke up with his girlfriend Abby Gile.